IEM PyeongChang brought StarCraft 2 and eSports as close as possible to the Olympics, and Canadian Zerg Scarlett rose to the occasion and wove a story as exciting and intriguing as the game itself.

SPOILER WARNING:There is no restraint on spoilers for this event.
VODs: All games covered in this article have links to their broadcast matches (if available) for your viewing convenience. If you’d rather watch this stuff rather than read about it, AWESOME!
Here’s a playlist for every match I could find directly related to this story. Enjoy!

It took almost five years, but when Scarlett took the stage against sOs in the finals at PyeongChang I hadn’t felt so excited for her chances to win it all since NorthCon in 2013.

Back then the Queen of Blades had just taken down He Who Must Not Be Named 3-0, and only had the impossible task of winning a series in JvZ.

She won two games, but not the 4 she needed…

Half a decade later, Scarlett seemed to channel The Tyrant himself as nothing stood in the way of her Swarm all the way to the Finals.

All that was left was the impossible task of defeating sOs in a big money finals.

So, even if you know nothing about sports, you know the Olympics is a big deal.

And if you know nothing about South Korea you should know that eSports is a big deal.

Would the South Korean Olympics be the first to include eSports? Nope.

But that doesn’t mean South Korea can’t put a big ole spotlight on their favouritest hobby!

ESL got a partnership and the full support of the International Olympic Committee so that their event in PyeongChang had a huge international spotlight on it as prelude to the official Winter Olympics.

And, just like that, everybody wants to go to Korea in February!

As per usual with StarCraft 2, the tournament qualifiers were complex and prolonged, as online tournaments are by nature.

Without dropping a map she blew through the early rounds and advanced to the qualifier’s Second Stage.

Held six days later, Stage 2 was supposed to be an 8 Player bracket with the top two players securing their tickets to Korea. 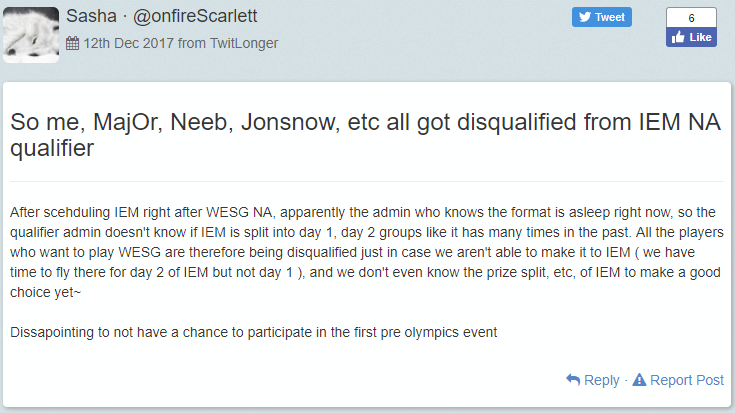 Four of the biggest names in North American StarCraft… dropped faster than an Aussie on the EU server.

To say there was a bit of a reaction from the community would be an understatement.

And then the Sun God himself came down from the Olympus of IEM headquarters and delivered unto us a goodly solution:

“Moving forward our solution is now to change IEM PyeongChang to become an 18 player tournament. The players who qualified on December 12th retain their spot to complete in PyeongChang while we will also replay the NA qualifier on December 16th for the remaining players who were originally disqualified. The 4 NA representatives will compete against each other at IEM PyeongChang in a round prior to the Ro16 where two players will move forward to compete against the rest of the world.

Each of the 4 players will be awarded travel and accommodation to PyeongChang and we will also extend the prize pool from 1-16 to 1-18.”
– ApolloSC

And with such an amiable solution, the community reaction could be summed up by one Reddit user who so eloquently put it:

To me anyway, Scarlett’s prospects looked…bleak.

She had to start against friend and rival Neeb and his Protoss shenanigans.

The American WunderToss and the Canadian Queen of Blades had played each other in 30 different matches and over 100 games.

Despite being almost even as far as overall results against each other, it always seemed like Neeb would get the better of Scarlett when it mattered the most.

And this qualifier mattered A LOT.

But an opening round 2-1 victory over Neeb gave me a bit of hope.

But … Special was waiting for her in the Winner Bracket Finals.

And as I will personally attest, ZvT is Bullshit and the Mexican 2017 BlizzCon semi-finalist was out to prove that point (and not just that I’m terrible and salty that I can’t defend drops).

So now Scarlett had to overcome Neeb once again, this time in a Best-of-Five.

It was going to be one hell of a series…

She took the long road, but in the end Scarlett would book her ticket to represent not just herself and her team, but her entire country at IEM Pyeongchang.

To say that IEM PyeongChang was a unique tournament probably doesn’t do it enough credit.

Players representing 15 different countries would be playing for the $50,000 Grand Prize.

Put all the Olympic context and Qualifier Drama aside, even a quick look at the roster and any seasoned StarCraft 2 fan would tell you that this event was going to be much different from most pro tournaments held within South Korean borders: 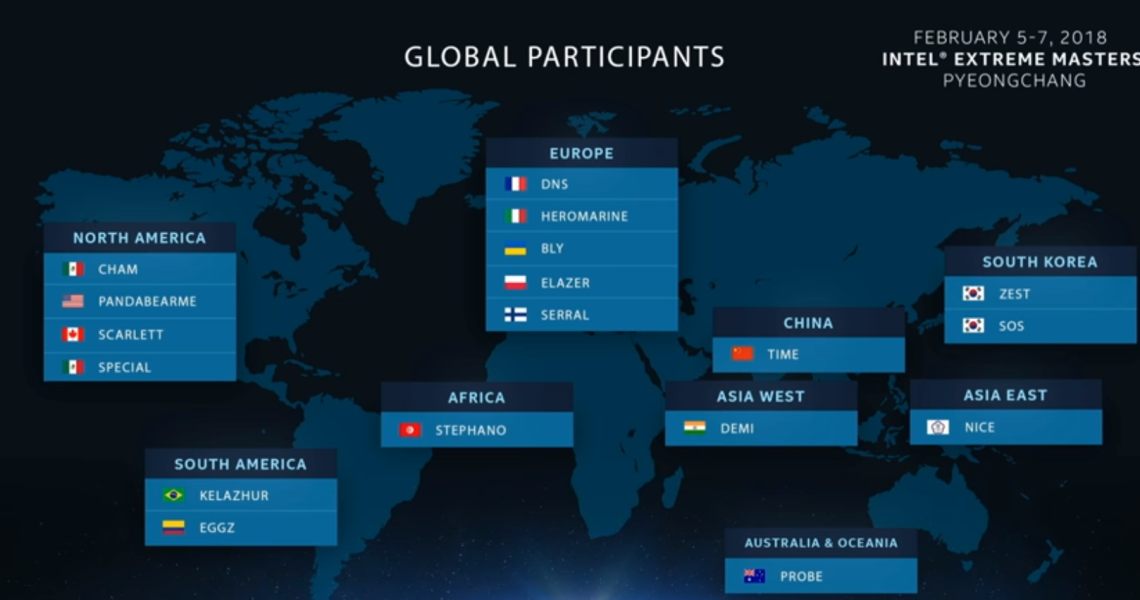 First off, and perhaps most importantly for many diehard fans, there where only TWO Koreans in the tournament: Expert Protossers Zest and sOs.

Well at least it would be easy to pick the favourites!

It was also pretty neat to see Wings of Liberty gamebreaker Stephano back in such a huge event, and representing Tunisia (with long-time up and comer DnS waving the French flag Stephano is usually associated with).

The event kicked off with the NA-Tie Breaker, where Scarlett took on Mexican Zerg Cham for the right to advance in a best-of-five series.

Heading into the event Scarlett had been lamenting her struggles in the Zerg versus Zerg matchup.

One look at the top of the bracket made it obvious that if she hadn’t been able to get a handle on the mirror matchup, her run wasn’t going to last long with guys like Elazer and Serral as potential opponents. 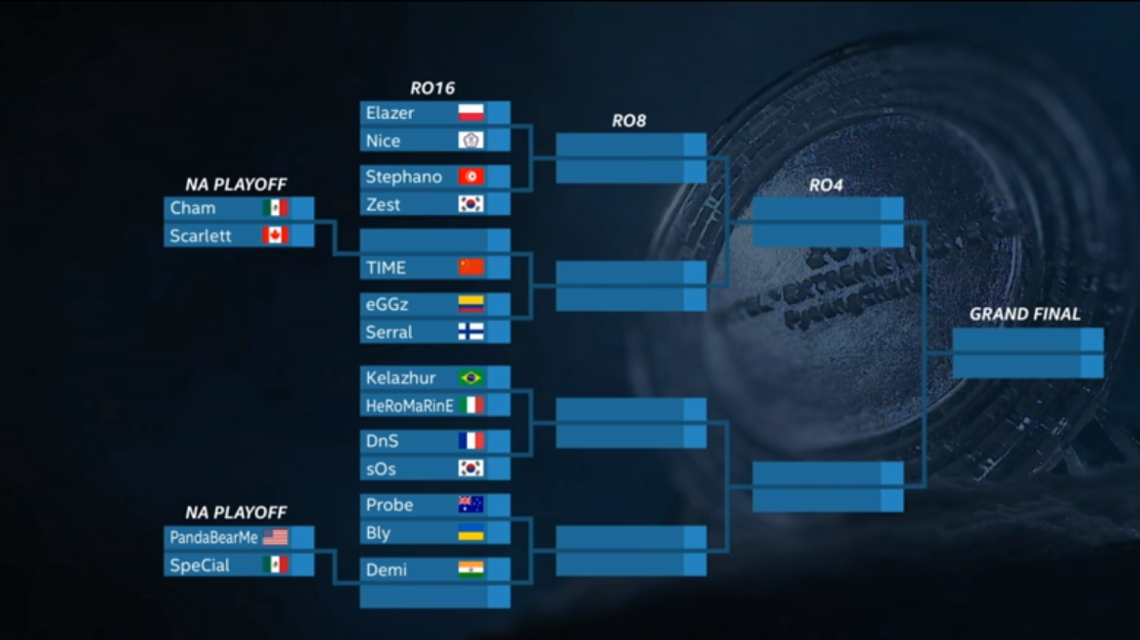 Well she passed the first test without dropping a map.

Next up was Chinese Terran Time, who had taken the mantle of China’s best Starcraft 2 player.

Personally, I didn’t know a thing about him except that he had just won the GPL, China’s top Starcraft 2 tournament. And he did it beating China’s established Zerg Greats iAsonu and TooDming.

It would take only four games to determine who would move on to the next round.

With the Quarterfinals set, this was the point where, if I was a betting man, I would have kept cheering for Scarlett and stopped putting money on her.

It was Finland vs Canada. Scarlett was facing a ZvZ knife fight with Serral, the Finn who made his name killing the world’s best Zergs.

In fact, he dropped only a single map during qualifiers (to Snute) and swept away his round-of-sixteen opponent, Columbia’s eGGz , in an intimidating preview of what he had planned for the Queen of Blades.

I’d seen this before, too many times… Considering her misgivings in the matchup, I had a lot of hope but not a whole lot of faith.

But I learned something. An old lesson that needs to be re-learned from time to time:

Scarlett hadn’t just made it past the ZvZ sniper, she looked good doing it.

Really, really, good. But her opponent was no slouch.

Elazer had just taken out Zest, which means he spared us all from the PvP finals many expected.

The Polish Zerg was in his in his sixth career Premier Tournament semifinals, and already had a Championship title to his name for winning WCS Valencia in July 2017.

He had made it to the stage at BlizzCon at the 2017 Global Finals.

This was going to be good.

After two maps the series was tied 1-1 and looked as close as it could be….

But Scarlett took the lead again in Game 3 and never looked back.

The Canadian would be heading to the Finals…

Undefeated. sOs hadn’t dropped even a single map in Pyeongchang.

In fact, he hadn’t dropped a map since the Korean qualifiers, which some would argue was a far tougher competition than the actual main event.

The most dangerous Protoss alive. The home-crowd favourite. The statistical favourite:

The Million Dollar Man dispatched French Protoss DnS with extreme prejudice, had no time for any of Brazilian Terran menace Kelazhur’s shenanigans, and didn’t lose even a single step on his sprint to the Finals when he came up against  Special.

Now, all he had to do was deal with another pesky “foreigner” to show the world why StarCraft is South Korea’s game.

Scarlett had never won a series against sOs in their previous three meetings.

Most recently, in the GSL Qualifiers, sOs beat Scarlett 2-0 before both advanced to Code S.

In fact you had to go back to 2013 at Red Bull Battlegrounds to the last time Scarlett took a map off sOs in competition.

But hey, if you’re going to win a premier tournament in Korea, you’re going to have to beat at least one Korean, and Scarlett likely wouldn’t get a better chance than this again any time soon…

Nobody could be blamed for predicting a quick series: a sweep or maybe a 4-1 in the best-of-seven finals.

Even taking a single map off sOs at this point could be considered a victory, all things considered.

And Scarlett came out swinging for the fences. With a proxy base-in-your-base. And she even got the Drone home safe and sound…

And then the Queens started their march across the map…

And somehow they still made it to the Lategame…

sOs adjusted for Game 2, and everything went according to the standard plan for each player.

Some adepts poking here, but mostly just macro macro macro. And then…

Lurker Drops in your mineral lines! Adepts drop across the map!

It was like Scarlett was delivering a little bit of vengeance for every zerg player who ever was locked out of their own base with a forcefield on the ramp.

But instead of forcefields, it was Lurkers.

God it was good…

Next thing Blizz is going to have to nerf? Lingdrop.

I mean, nobody actually pulls off the reverse sweep right? I mean…not even sOs…

Fool him once, shame on him… Try the lingdrop twice…shame on her.

The forecast called for bane-rain, but even that wasn’t enough to throw sOs now that the pressure was on.

The siege of Scarlett’s third base would decide the game, and it wouldn’t be settled quickly.

First the fight was at one third base, then again at another third base. And just when Scarlett took a breath, down came the Immortal hammer.

sOs shuts the door, nobody is sweeping him out of the finals.

Game five could be summed up in one word: Pressure.

A gasp from Korea. This wasn’t supposed to happen.

Sure, the deck was stacked against the Koreans from the start, but that’s not supposed to matter, right?

And it did happen.

Live with the world watching, with eSports as close to the Olympic spotlight as possible.

It was fantastic moment to be a Canadian, a Zerg, a Scarlett fan, a StarCraft fan.

So many years, so much potential, so many heartbreaks.

But Scarlett finally had the crown to match her title of Queen of Blades.

And what a journey:

to the winner of the Greatest Game of StarCraft 2 Ever Played in Heart of the Swarm,

Media used in this article are reproduced without the express permission of their copyright holders under Fair Use as defined by USA federal copyright law (17 U.S.C. 107) as nonprofit review/commentary with full credit given to original creators and copyright owners.

If you feel your work is being infringed please contact the author!

View all posts by TroySC2